A new long-term lease approved by San Diego City Council and the Board of Education means new life for San Diego High School and its 139-year-old campus. 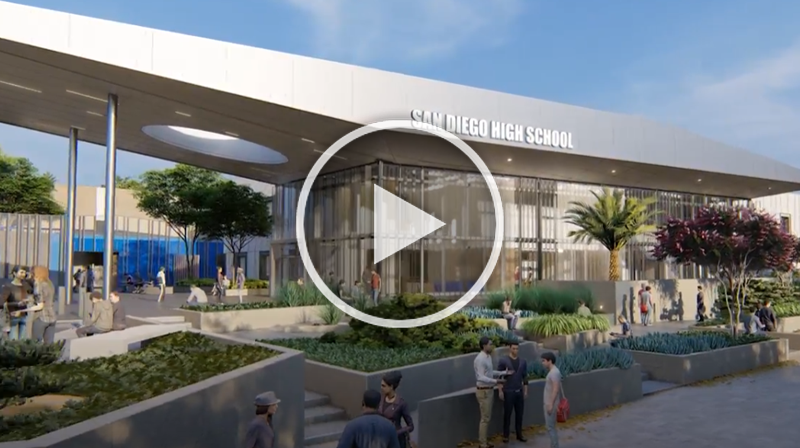 San Diego High serves 2,500 students from communities throughout the city in the schools of Business, Science and Technology, and International Studies. The campus has been nationally recognized for its top-ranked International Baccalaureate Diploma Programme. It has an active alumni association with distinguished graduates and is one of the district’s most used sites for community, recreational and public activities.

“San Diego High has always been intertwined with the history of San Diego and Balboa Park," said Francisca Del Carmen-Aguilar, Principal of San Diego High School. “And now, we can stay where we’ve always belonged, allowing students to grow and thrive in the heart of the city.”

Responding to the will of voters, the new lease approved by the San Diego City Council earlier this month allows San Diego Unified to start a long awaited multi-phase modernization of the high school campus.

Opened in 1882, San Diego High was first known as “Russ School.” The population boomed within the first 20 years of opening, igniting the first campus expansion, known as “The Old Grey Castle.”

From 1907, the campus underwent a series of transformations until 1973, when the “Old Grey Castle” was torn down for earthquake safety concerns.

The upcoming project will rejuvenate the campus once again, complementing the long list of successful teachers, alumni and decorated athletes - including the “Mother of Balboa Park,” Kate Sessions, who taught at San Diego High, and National Football League (NFL) player Art Powell, who graduated in the 1950s.

Starting in October, San Diego High will undergo interior renovations, including new student collaboration spaces and modernization of classrooms, student services offices, restrooms, and support spaces. Exterior improvements will also be made to the main entrance facade, including new signage. The project also includes improvements to interior finishes in the counselor's area and classroom buildings.

HVAC will be installed in classrooms and support spaces throughout the campus. The project is anticipated to complete in 2025.